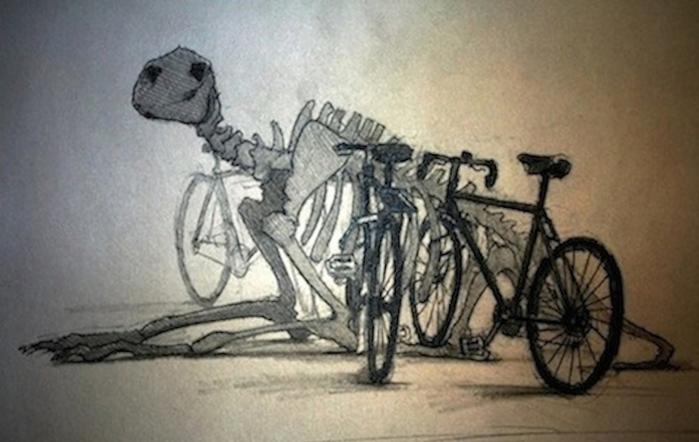 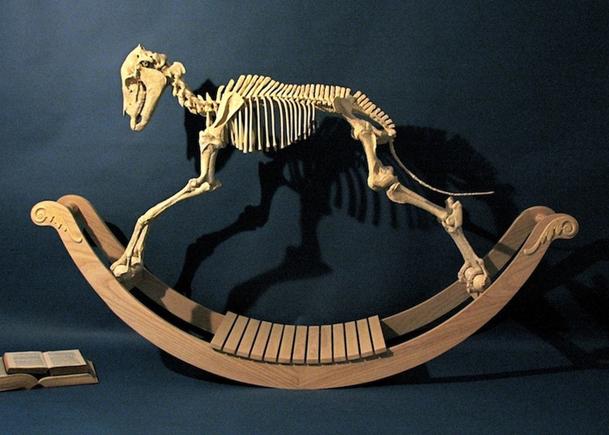 The Museum of Paleo-Osteological Interpretation

The evolution of the horse (Order Perissodactyla) includes modification of the foot from five distinct narrow hooves, decreasing to three and presently, the single hoof which is the remaining middle toe.

This whimsical example was created in Great Britain ca.1857 by Emily David, a protegee of Benjamin Waterhouse Hawkins, one of the early sculptors of life-sized prehistoric statuary.  It is believed to have been made for a grandson of Sir Richard Owen, the foremost paleontologist of the period.  The rocking horse was kept at the family home in Sussex until 1914 when its history becomes clouded by the storms of The Great War.  When, in 1933, the grandson passed away in Paris, no mention was made of the piece.

Following World War II as new construction forced the relocation of many cemeteries throughout Europe, the horse was discovered in a private mausoleum near Warsaw.  In the chaos and secrecy of the Cold War it vanished once more, only to resurface in rural North Carolina where it was purchased for restoration.

This project consists of the the creation and installation of the bronze skeleton of  a large prehistoric mammal in repose, resting on its forearms.  Its exposed rib cage will function as a bicycle rack.  A bony crest on the dome of its skull (See Gallery 5)  will suggest the form of a bike helmet. Based on the quadroped Chalicothere from the Miocene, this mammal is uniquely qualified to evolve into a bicycle rack.  Measuring 12 ft. in length x 4ft. high it will be gracefully magnificent as public art while engaging the imaginations of people of all ages and backgrounds.