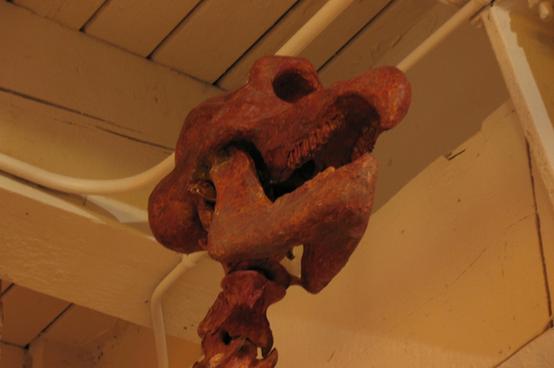 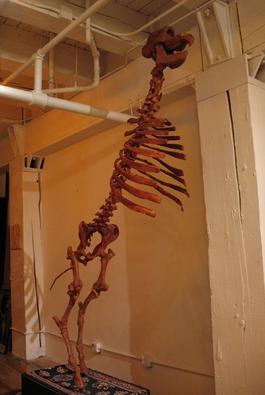 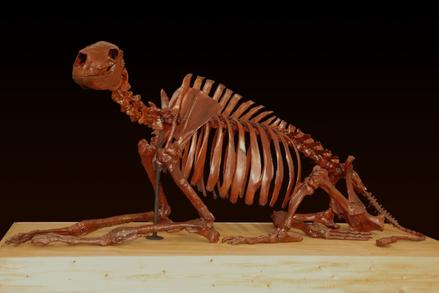 The unique aspects of this creature present many questions for which an equal number of hypotheses  may provide answers.  The monocular vision was heretofore unknown in the scientific community, but as throughout all of nature this apparent shortcoming is compensated for, in this case by the enlarged acoustic bullae at the rear of the skull.  These would have given the animal extraordinary hearing capability allowing it to thrive among the predators with which it co-existed.

With no indication of forelimbs at this time, this was a true biped.  This feature seems to confirm the idea of its visual and auditory senses working together in concert to achieve the balance and grace necessary to run at the speeds indicated by form and alignment of its legs.  The hooves would indicate an environment of prairie or grasslands.  The beak was most likely a tool for digging roots, although it may have been capable of breaking small bones as well. 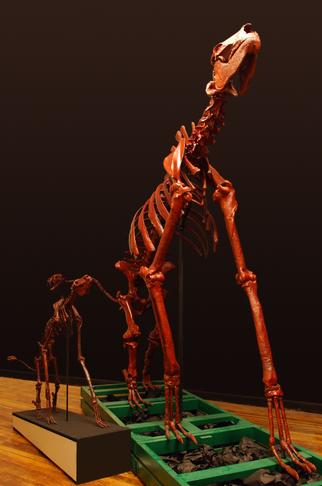 Discovered in 1887 by Harold Vanselow, a maverick dinosaur hunter and  one- time member of the Othniel Charles Marsh team from the Yale Peabody Museum, these Chalicotheres were named appropriately enough after the Laurentian Divide in northern Minnesota where tributaries of the St Lawrence River divide and flow in two directions.  Dating from the Miocene era, the bones retain the rich deep color of the Iron Range where they once roamed in large herds.  The purpose of the male's secondary head has been much debated, some experts believing it to be fully functional while more recent opinions maintain it was more probably used in the mating ritual.

This family of nearly complete skeletons was recently re-discovered packed in crates during foundation re-enforcement of a home in South St. Paul, Mn.  Although some structural restoration was necessary, these specimens are otherwise presented in the splendidly ancient condition in which they were found.

​This burial mask dating from the 10th century is believed to be a relic from the tomb of an unknown Viking warrior.

The form is based primarily on the pelvis of a bull which represents strength and virility.  The spinal column and rib cage which protect the warriors eyes are those of a young wolf.  The ram's horns give the warrior's spirit the means to ward off demons who may attack him on his journey after death.

The fragments of this magnificent artifact were discovered by my cousin Sven, An amateur archaeologist living outside the village of Valterbaal in Sweden.

This piece has been sold to a private collector