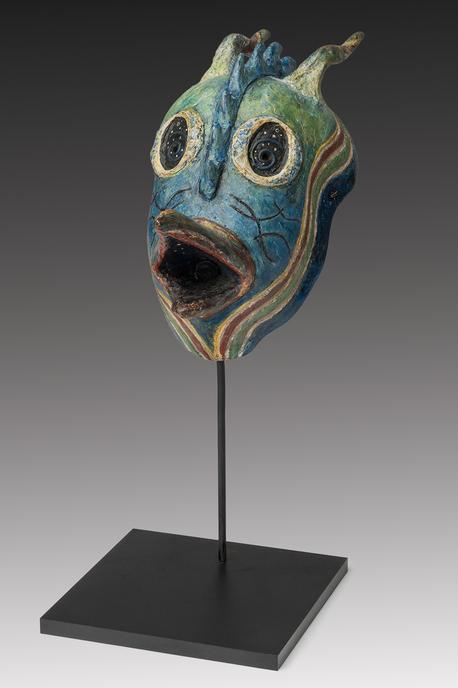 The Harmony of Nature

...and dating from the 18th century, this mask may be traced to the Society Islands (Oceana).  Worn by a priest or Aiori, the mask was formed from the skull dome of the priest that preceded him.  The mask was presented to Captain James Cook during the circumnavigation of the globe 1770-1773.

From the journal of Sir Joseph Banks; Ships Naturalist:

The Captain has requested that I record here a singular event we witnessed this day.  As is the case with all cultures, the natives of these islands have created an elaborate tale to explain their existence and celebrate the event through rituals which demonstrate (to this writer) a fully unique form of worship.  The priest wears a mask depicting creation itself.  From chaos flows the seas, the wind and all of life as well as music, which to these people, is a powerful form of spirit.  There are carved symbols addressing the remarkable navigational skills they have developed as well as a bird's beak which references the music that exists in the natural world.

I have been informed that the priest is constantly chewing a specific flora mixed with his own blood (referencing the god Dagli's creation of all life from his blood) and which he expels through a hole onto the lower beak.  The wearer becomes Dagli and bestows music to the rest of the tribe.  At one point the ceremony pauses while the people sing at a low register on a single note.  The god dances energetically and the people begin to approach him, placing their finger within the beak and then bringing the finger to their lips.

According to Seaman third class Thomas, a fine fiddler, who, with permission, participated in the ceremony, consuming the mixture results in greatly enhanced hearing and initiates an overwhelming desire to sing, causing one to sense that they have become, in fact, the music that courses through all of nature.  As each takes their share of the mixture, they begin to sing or chant, each participant chanting a note which harmonizes with  the preceding note.  By the time all 40 souls had consumed the substance, a sound unlike anything I have observed filled the air.  They raised and lowered the volume and pitch as one with no apparent prompting and seemed to be a vocalization of the motion of the sea.  The harmonies achieved were indeed, quite remarkable.  I will commit to record here that as one who has been fortunate enough to have heard many of the finest choirs in Europe, I have never witnessed anything remotely akin to the delightful complexity of chords that emanated from these "uncivilised" peoples.