is a minor deity of ancient Mesopotamia.

As a messenger, the spirit holds a cone

which dispenses a sacred fluid from The Tree of Life.

The serpent and moon are each symbols of renewal.

Here they are joined, suggesting this fragment may 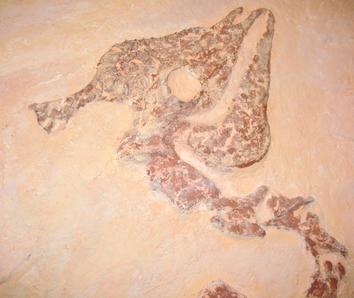 In 2006, as excavation began for the renovation of the St. Paul Union Depot, a wooden crate containing this fossil was found in a small, subterranean, cave-like room.  The intended purpose of this room is uncertain, as it does not appear in original or subsequent architectural plans.  A telegram, dated 1907, found in the crate states, "Am sending fossil that may be of interest.  Met with F. Clover who reports finding it in 1896.  Age of stone:  20 millions of years."

During the late 19th Century, the name Francene Clover was known to children everywhere.  As a self-taught fossil hunter, she was depicted in school books and pulp novels as a combination of Mary Anning and John Muir.  Clover and her trusty mule Jim roamed the area in the Dakota Territory known today as the Stephenson Formation, making important paleontological discoveries which were described by Edward Drinker Cope as "often lyrical in composition".

As a narrative device, the creation myth predates recorded history as a means of explaining forces of nature, with frequent use made of animal characteristics to symbolize these forces.  In this interpretation, the skeletons appear as spirits of the prehistoric horse Ferrahippus, juxtaposed with the ancestor of Oreamnos Americanus.  The strength and speed of this iron horse unite with the agility and sure-footedness of the Rocky Mountain goat to create The Great Northern Railway.  Referring to this piece in her journal, Francene Clover described it as "A fine example of the whimsical serendipity of nature." 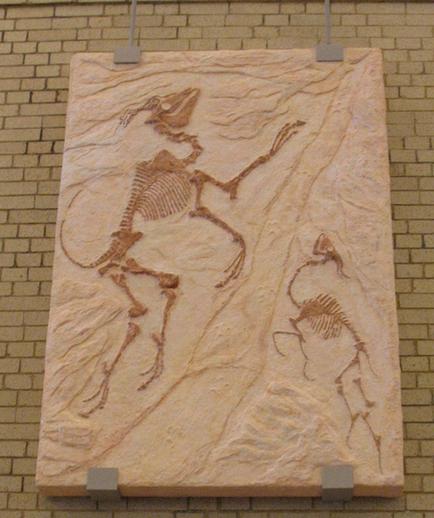 This "Imagined Fossil" was commissioned to be permanently installed in the newly renovated Saint Paul Union Depot in 2013.